One of the main things I want to do here in Alaska is fish. I want to catch a salmon and I want to catch a halibut.
When Kyle saw the Dolly Varden I caught a few weeks back, he couldn’t resist joining us for the fishing portion of the trip.
Luckily he did. I like to fish. Kyle is a fishface. He LOVES to fish. He loves talking about fish, chasing fish, tricking fish with imitation flies, cleaning fish, and eating fish.

He talked to his fish people and lined up a halibut trip for today and a drift boat trip on the Kenai River in a couple days.

We woke up early… 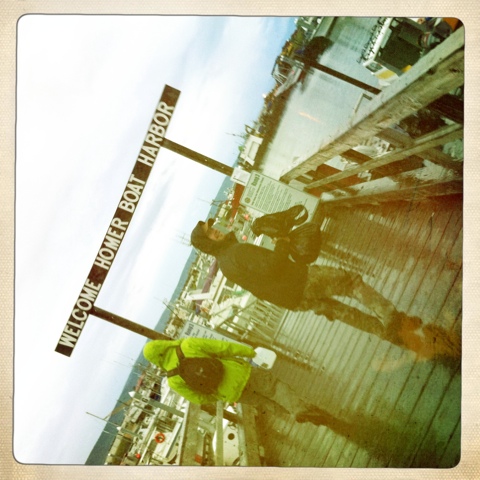 The boat was called the Optimist, which I thought was appropriate. 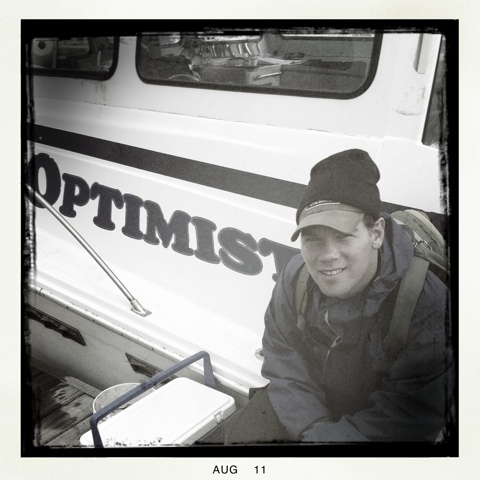 We went 22 miles from the marina. The weather turned on us and we ended up changing course to eventually troll for salmon near a place called Dangerous cape. 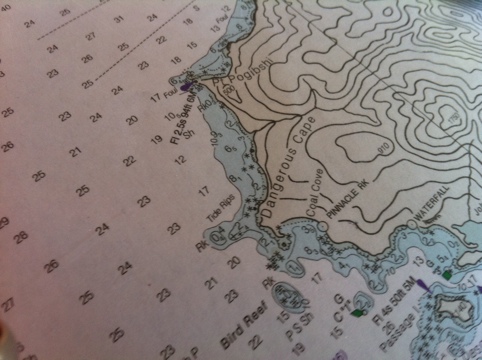 The seas were a bit rough but no one got seasick. Since slack tide wasn’t until 11:30 we chose to troll for salmon during the morning hours. 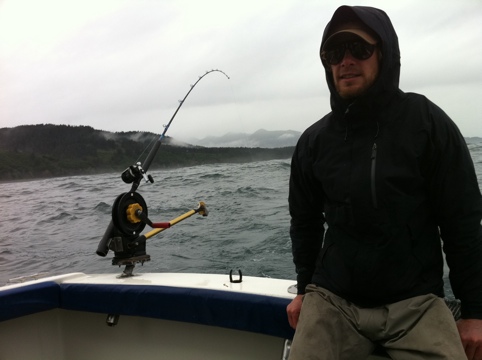 Trolling for salmon is a team effort. We were with a family of three and someone had to drive while another person eyed the four fishing poles and the others pounced on a pole if a fish struck. Meanwhile Daniel, our guide, was keeping lines full and navigating.

Not a lot of action but Brendan brought in a nice pink salmon.

After a morning chasing salmon we moved to halibut country further off shore and 300 feet of depth. What is that in fathoms? We switched gear and dropped lines.
Much more exciting. We had halibut coming in on every line.
.

My arms aren’t strong enough to reel in a 30 lb fish from 300 feet of depth. I was able to patch together a technique together to get the line to depth and jig the bait. My version of harelip prayers – (See “The Brothers K” by David James Duncan.)
The technique worked. I was hooking fish! Then Brendan and I developed a strategy where I would hook fish and he would reel em in. By the time he had a fish in the boat I had the line re-baited, dropped and another fish hooked. Fun for me. Brendan did the hard work. Reeling flat fish from 300 feet of depth can wear you out.

Plenty of help from Daniel…

I drove Steve to the hotel and in the matter of 37 seconds, he was passed out Cold on the bed… –MV

We had the fish processed, frozen and shipped right at the marina. We kept the salmon and one small halibut filet and took it to Captain Pattie’s for the to cook. Best fish & chips I’ve ever had.
Hands down, me too — MV