We opted for shuttles for the next couple of days, as they allow you to get on and off the bus. As a rule, they won’t let you get off by wildlife, but the driver will drop you off 1/2 mile away from wildlife and you can hike back. Which is interesting.

We rode out today to one the farthest places available by road in the park – to “Wonder Lake” (about 90 miles in).

On the way, we saw plenty of wildlife AND we saw one of the cooler things we’ve witnessed yet. Yesterday, 7 Wolves killed a Caribou. Unfortunately we missed that, but today we drove by the remnants of the kill and were lucky enough to see a big Grizzly Bear finding it. All that was left was a pair of bloody antlers (FYI – there is velvet on antlers) and a red rib cage.

The bear gracefully attacked them, using his big paws and mouth to get whatever was left to salvage. It felt like a National Geographic episode for sure.

The lake ended up not exactly full of “wonder”. Average compared to other lakes we’ve seen on the drive and full of Mosquitos. But, now we know.

Next came the adventure for the day. Let me set the scene. Winds started picking up dramatically on the drive back. In fact, at a rest stop the wind almost knocked Steve over as he got back on the bus. But, he and Mike were pretty set on finding a place to hike and set up the spotting scope. So, they watched for a spot and finally found a good one. I think the driver thought we were nutters getting out in the windy conditions, but after asking Steve if he thought it was a good idea if I came and him not really giving me a direct answer, I bundled up and stepped off the bus with the boys…

We hiked up on the tundra for a ways til we got onto a ridge overlooking a river drainage and a valley. The ground was the most exciting part for me – it was grassy sponge that you could literally jump on or stick your feet in. A great part is that it doesn’t leave any stickees on your socks and it doesn’t leave your feet wet. It’s a difficult trek, though, because you can get stuck quite often and there are no trails so you have to traverse through lots of brush. Steve was a trooper as his stick would get caught quite easily.

We got settled in and checked out our surroundings for a while, with the binoculars and spotting scope.

After about 45 minutes Mike yelled “I got a grizzly”.

So he and Steve tried to lock in with the scope but then lost the bear. For about 20 minutes they couldn’t find it. I was relaxing behind them and felt hungry so I pulled out a chocolate chip cookie, and while I was eating it I said “oh, there’s the bear, right on the road!” So they looked, and we realized that the bear was, not slowly by any means, walking straight towards us. Here, a picture would be probably be ideal, but we had to make a quick decision of taking a photo or getting the hell outta dodge.
We opted for safety, so we began our hike back to the road, the opposite way of the bear, even though we lost sight of him, which was quite scary. 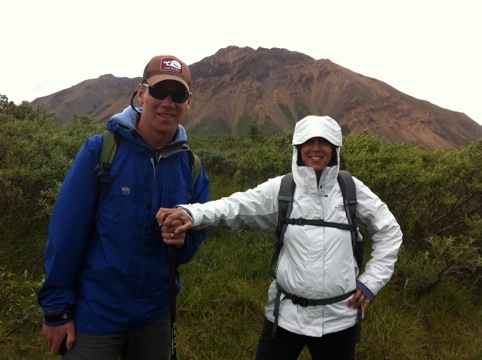 We survived. We got to the road about 45 minutes later feeling pretty amped up. I was also feeling the same feeling I did after that hike I did a couple of days ago.. “Mama Jill would kill me if she was here:)”

On the way back to camp, we passed by the antlers and rib cage. Next to them was the bear, passed out cold.