We woke up around 11 at a pullout at mile 6 of the Hartney Bay road. The spot was overlooking the water and green mountains. Its nearly impossible to fall asleep before midnight because its light out til then.
Brendan fell asleep to the sound of seals. We don’t hear the outside world that well in the lower bunk.

Anyway, it was a day of errands. Adding coolant… 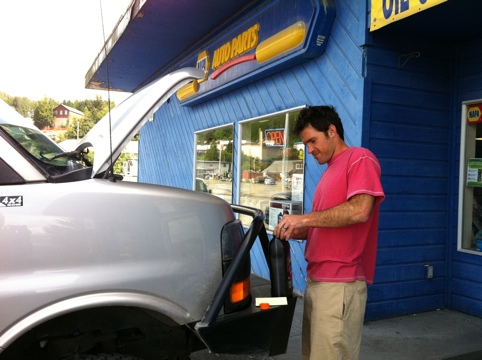 …getting gas, filling van with water…

etc. I was responsible for laundry, and it was very exciting for me.
We had three loads. The detergent dispensing machine was broken and there was no attendant. But the exciting thing… Russians. The laundromat was full of them. I think they were gypsies so I had to be on my toes. They all wear silk dresses and head pieces and are large and seem tough, like they eat lots of meat and potatoes. As i talked to my mom on my cell, i managed to sneaked a couple of pics:

We then lunch at Baja Taco, a local hotspot, and worked on the Internet.
We left for better wifi at the library for a couple of hours and then returned to Baja Taco for dinner. It’s no Juan’s Flying Burrito… But Steve loves the sockeye salmon tacos and I love the milkshakes.

We head out to the end of the road to camp at a spot we call the “Bonsai Forest”. Here, we had in depth conversation about preparing for death, the “right way to die”, etc. Intense, hard, but important to talk about.

The next day, we woke up late in the beautiful Bonsai Forest.

Headed to the Whisky Ridge Tackle Shop to see Tom, who helped us gear up my fishing pole. Grumpy, friendly fella, reminded us of Ryan Gootee. Are you SERIOUS!! 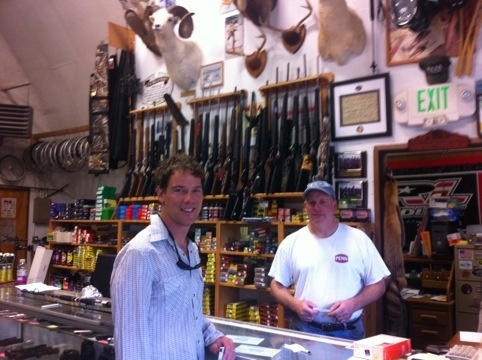 Then head to Hartney Bay to make our first attempt at catching a salmon.
They were definitely out there. We could see pools of them in the clear water. But those bastards were not interested in our lures. I think they were laughing at us from below the water
A couple of guys next to us “snagged” some pinks, but they had to throw them back in bc thats illegal where we were fishing.
For those of you who don’t know what snagging is:
There are so many salmon in the water that your hook will ‘snag’ a fin or the side of a fish rather than their mouth. These salmon are kind of “salmon drunk” – they are mostly interested in dropping eggs or fertilizing eggs or traveling up the river to secret places where they can drop eggs or fertilize eggs. Kind of like teenage kids. Amazingly, these secret places are the same places where the salmon were conceived (a few years earlier) and also where they will die (post drunk fertilization) that they really aren’t interested in food (unlike teenage kids). So, instead of a salmon chomping on your lure cuz they’re hungry, your lure snags a “salmon drunk” salmon. That’s illegal here. -SG

There were a couple Russian who snagged a big Salmon and KEPT IT! We saw em. 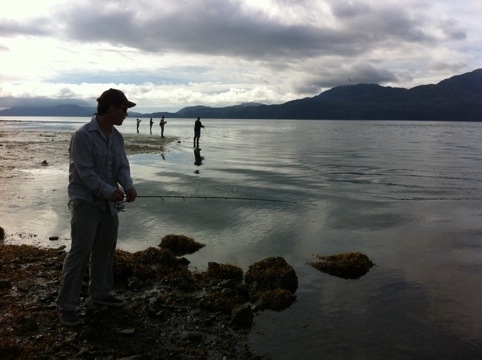 Then back to Baja Taco for fish tacos and milkshakes. We saw familiar faces, as the town is very small. We’re recognized by the Ironhorse. 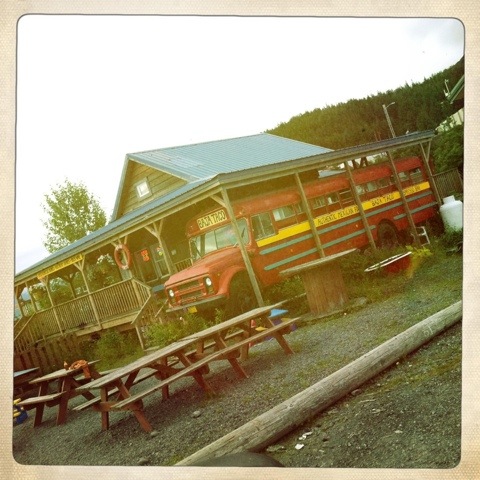 Last night sleep in the same pulloff in the Bonsai Forest. Still pretty, but difficult to pee on bc of jagged rocks. And it is Unbelievably Inconvenient how much you have pee when you’re pregnant and living in a car.

Bye to Cordova tomorrow morning. It’s been good to us.