Pretty non-exciting day but we’ll wrap it up in a hurry, just for journal purposes.

We got up early and got on the ferry.
We had to dodge lots of icebergs so there was a little more turbulence than last time.

We stopped at Valdez. This is the best picture I could get of the one thing we could see.. The oil rigs in the distance.

It looks at lot better off, and prettier, than our gulf coast.

Steve and Brendan were really excited about it. 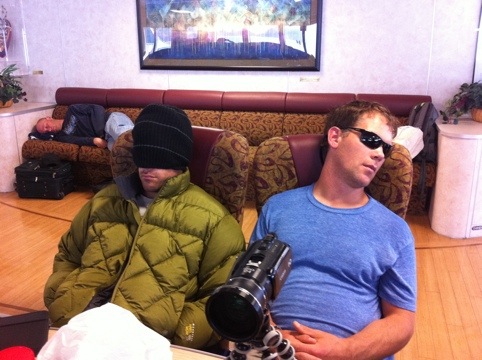 Drove thru the crazy Whittier tunnel again – more traffic this time and equally as gnarly, and made it to Anchorage.

It was cold, raining, we were hungry. We tried google for about an hour to find a Chinese restaurant. By the time we found one Nerb was so annoyed that he stayed in the van and had a cheese tortilla, and Steve was about ready to give up on life.

BUT. It ended up being really good, we had leftovers for Brendan, and then we went to see a completely terrible movie, “Cowboys and Aliens.”

End of the night was the best — stayed in a Hampton Suites Hotel and scrubbed clean and Steve got to relax in a hot bath, and I washed his hair.
Best, most comfortable bed and toilet we’ve had in a while.