Kyle and Brendan dropped Steve and I off at the Bald Mountain Tours air strip to go on a bear viewing trip.

Here, we put on waders and boots and got on another 10 passenger plane similar to the one in Denali, but taking off from the water this time.
Similar rides, but the scenery wasn’t as cool and the pilot wasn’t as hot. 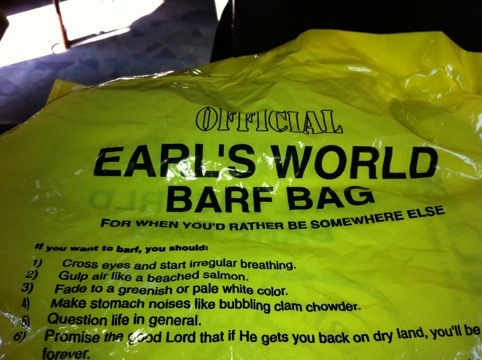 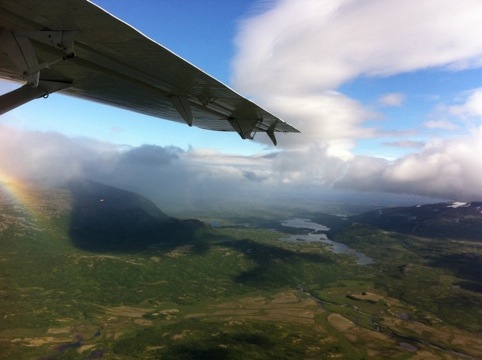 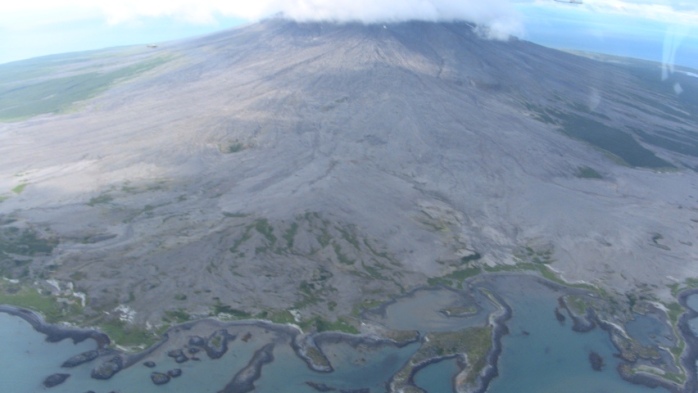 When we landed we had to put on our puffy rain gear. It was cooold and rainy.

We had to hike about a mile to get to a ledge to watch the Grizzly Bears. Steve was a trooper and kept up with everyone just fine.

We sat on this ledge in the freezing wind for about 3 hours and watched bear after bear show up and feed on big red salmon that were spawning. Completely amazing. 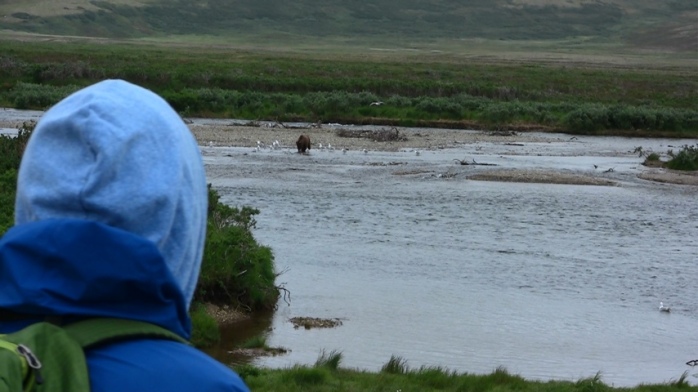 We are about to work you over with pictures but… What choice do we have?

We then went down right next to the water and watched them hunt for fish even closer. The bears would literally walk right past us. The guide didn’t seem nervous so we remained calm.
This was definitely one of the coolest things we’ve ever encountered. 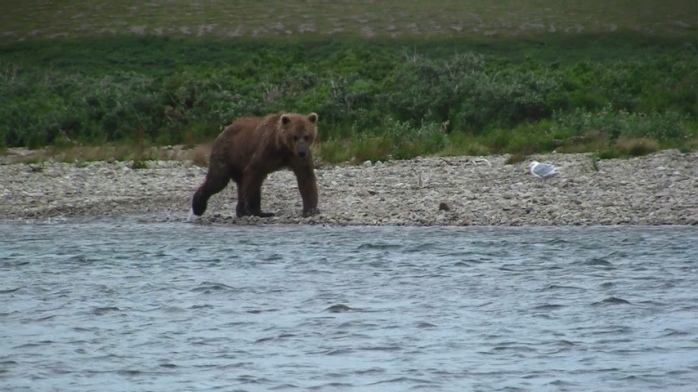 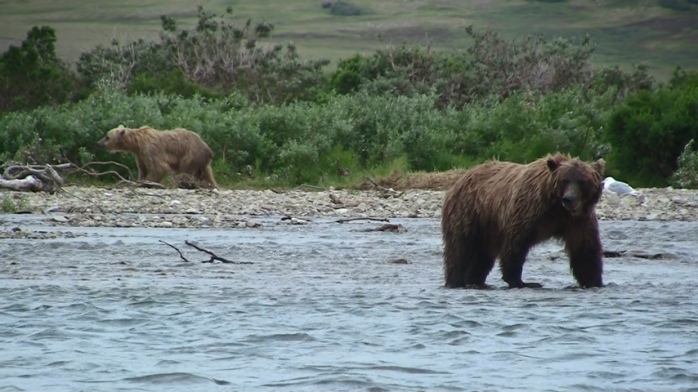 This mangey one literally walked right by us…

This was our favorite bear. It was an old male. He had scars on his head and one of his ears was hanging off but he was an excellent fisherbear. The younger bears were jumping and pouncing around the river but rarely snagged fish. This bear was moving slowly and methodically along the shore and nearly every time he jumped in the river he emerged with a salmon.

He posed for a picture with us. 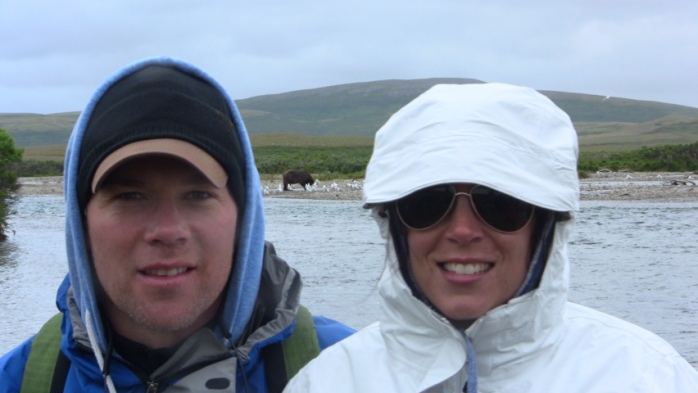 A cool sequence of his attack… 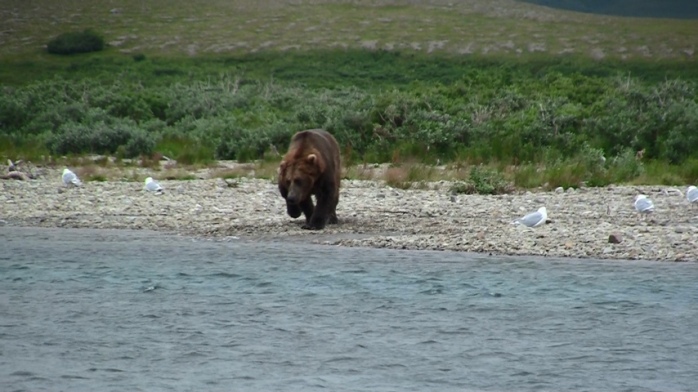 On the way back to the plane, we had to hike back up the muddy hills and traverse across streams and Steve got it done, whether he was sliding on this butt or on all fours, pulling himself up by bushes, or getting help from others in the group.

He has to struggle with physical things that he used to do with complete ease, and he does it so gracefully. He’s the bravest, most amazing person I know. This was an awesome experience to share with him. 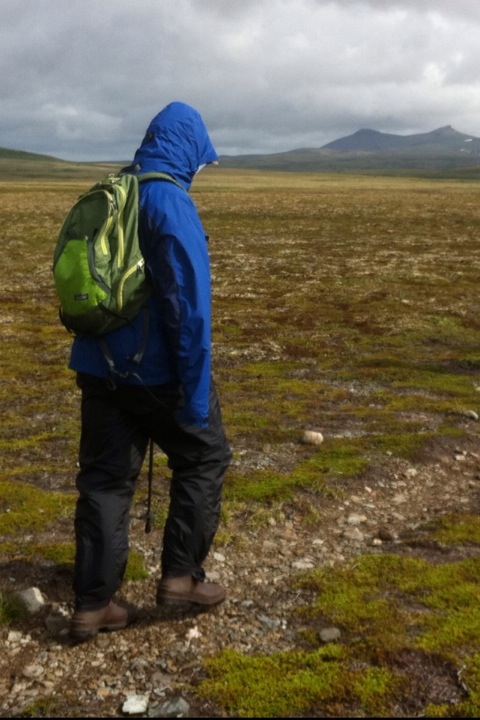 We flew back and the boys picked us up and we went back to Homer to eat fish and chips for the 3rd day in a row to a place called “Homer Boardwalk”.

We then left Homer Spit… 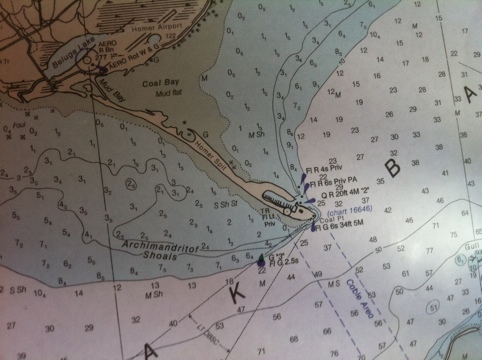 … and drove to Cooper Landing to camp close to our fishing spot tomorrow. Lots of traffic on the road tonight.