Posted on September 3, 2011 by STEVE GLEASON

If music heals, and I’m sure it does, I am a healthy boy.
Music can foster an energy that hard to tap into. Music can be calming or powerful or angry or inspiring. Or healing.
I love hearing a song and having it take me to a memory with feelings so real its as if they are brand new.
This weekend was an incredible reunion of friends who are like family to me.

Yesterday I received a text message from a great high-school buddy, Josh Hartnett.
As follows… 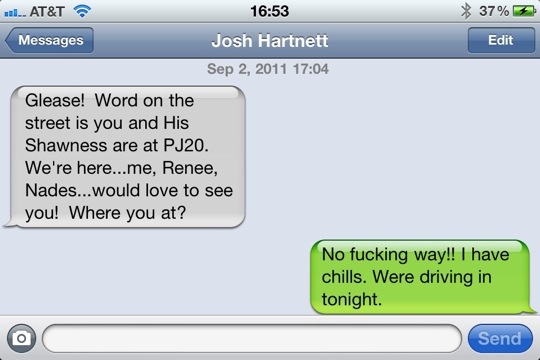 I am not even sure how to explain the rest of this plot. It turns out that Josh was at the show with a guy named Chris. Well, Matt and Chris have been corresponding for the last month or so. Why? Because Matt, being Matt… 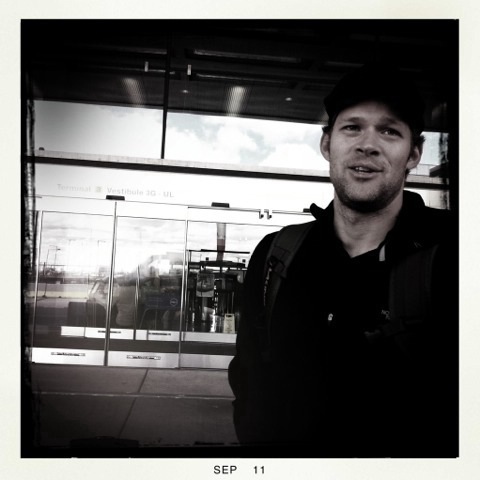 was trying to get the best connection possible to enhance our PJ 20 experience.

Back Story: Through a friend, Erica Perkins, I connected with Mike and Ashley McCready a few years ago and I got to go backstage a couple times for PJ shows. Me, being me… 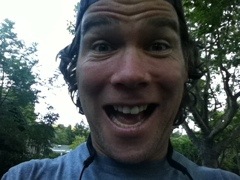 I never really want to ‘bother’ Mike if I’m going to a PJ show especially a 20th year anniversary show.
Well, it turns out (hold on tight here) that Chris works for Mike and Matt was talking to Chris and Chris knows Josh and Matt knows Josh and I know Josh and Matt and Mike. But none of us really knew that we knew each other until this text (see above)!
Whew!

Long story short, Matt and I left Spokane four days ago content with any version of Pearl Jam’s 20th anniversary show. Then we picked up Mike Moses… Then Salters arrives… Then Hartnett…

Next thing I know we are camped out on the hill overlooking the amphitheater. Then we are all shining love on eachother in the VIP tent behind the stage talking about the best of times.

Mike and Ashley came down to catch up and say hello.

And Ashley, being Ashley… 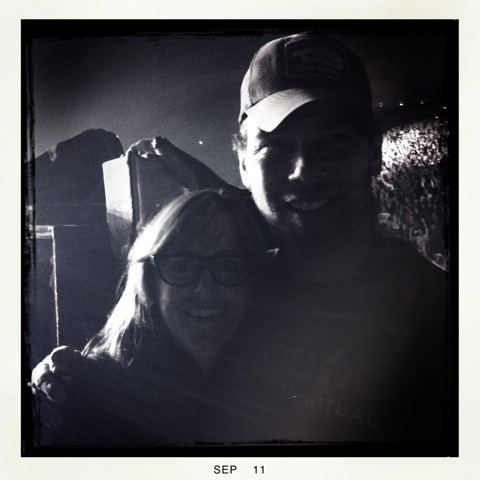 …says she wants us side stage for the show. Then she does a little wave of her hand and has someone print these up.

So, why not? Better now than never right?

Play this video for my exact pre show thought:

And then…
The lights dropped and things got crazy…

So we were on stage. Rockin in the free world. For two nights. Cameras. Bodyguards. Crowds. Tambourines. Set-lists. And it was incredible.

But at some point on the second night during ‘Given to Fly’, I walked over to Matt and hugged him and we started weeping.
It’s his favorite song.
And suddenly this wasn’t about passes or access or crowds.
It was about music and friendship. A good combination. I went to middle america with an intention. An intention to enjoy the band that built the soundtrack of our lives with my friend. And it infected the people we met up with. More friends. New friends. Family. And even when life turns brutal and impossible the soundtrack remains to hold us together. Even if we are weeping. The soundtrack remains.

“…And he still gives his love, he just gives it away
The love he receives is the love that is saved…”